Top Reasons You Should Avoid a Used Roomba 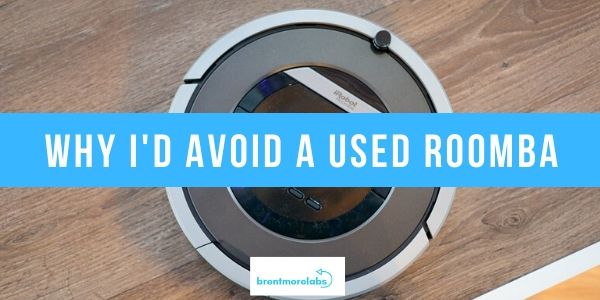 Especially if you don’t have a lot of time every day, you’ll love having a robot vacuum in your cleaning arsenal. All you have to do is click on your Roomba, maybe set the settings to fit your schedule, and watch it clean, but the Roomba is known for being a little expensive.

You might want to buy a used irobot roomba. There are so many ads for used roomba for sale. Is it really worth it though? A used Roomba might end up costing you more than a new one down the road, which is only one of the reasons we’ll talk about why you should avoid buying a used one.

Reasons to Avoid a Used Roomba

First off, like any used technological product, buying used means that you don’t get a warranty. And since you can’t necessarily check to be sure that the sensors work with your home, or that the battery charges well, you might miss that warranty when something starts to go wrong. Any issues are yours to deal with.

An older Roomba might still work, but like many vacuums, it might lose suction power over time. You may notice your used Roomba still working, although it doesn’t matter if it turns on if it doesn’t suck up everything. There could potentially be clumps of debris left on the floor that it didn’t pick up if only because it’s a used model.

This doesn’t mean that your vacuum won’t work at all, or that you’re buying something that’s broken, but this does mean that you might not be able to pick up all of the things the Roomba is known for. More difficult objects or tougher carpeting may not be picked up as easily as all the rave reviews for the Roomba say.

You’ve probably noticed that the longer you’ve had your computer, the less charge it holds. This happens with Roombas too, since the average Roomba battery will only last for 400 charges. If you use it maybe three times per week, that’s maybe 150 charges in one year.

Three or so years is the amount of time you have with your Roomba then. So if you buy a used one, be aware that it won’t last forever. It likely won’t last for all that long at all.

You might notice an older Roomba having trouble working when you first get it. There might just be a few odd clicks or thumps, or see that the brushes or extractors have stopped spinning after just a short amount of time.

These are common maintenance problems, but you don’t want to be dealing with these types of things when you just get your vacuum.

Unfortunately, with a used one, it’s much more likely that you’ll experience some early issues. This is true since you don’t know what’s going on inside the machine, and unless you want to open up your Roomba to look inside, you might not ever know.

You have no idea what’s gone on with your Roomba. The last owner could have dropped it or kicked it, or it could have gotten caught on a rug or over rocks who knows how many times. The seller wants to get rid of that thing, so despite how well-intentioned they might be, you don’t necessarily know everything that’s happened to your Roomba when you make your purchase.

When you buy a new product, you generally a few accessories to make it an even better product. With the Roomba for instance, you would usually receive replacement brushes, virtual walls, and extra sweepers, all of which make the machine easier to use in your home. If you buy used though, you won’t get these items, but you’ll still have to pay at least a good amount of money for the machine itself.

Even with a used Roomba, you’ll still have to shell out at least a hundred dollars for it. It’s a Roomba, after all, so it makes sense that any seller will still want a good amount for it.

Now, you might find a better deal and want to jump on it before someone else does, but just be aware that you’re still paying a good amount without getting the included accessories, the battery life, or the machine history that you would have when you’re buying a new one. If the price just isn’t worth it for what you’re getting, you might want to buy yourself something new instead.

You don’t want to miss out on a good deal if you find a great Roomba out there. You also don’t want to buy a used Roomba and find that you threw away money for something that doesn’t work as it should. Really consider these reasons why a used Roomba may not be worth it, and potentially think about just going all in for a new one.