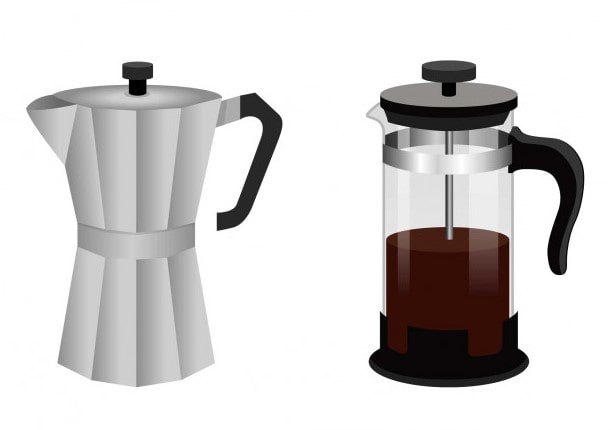 Both a moka pot and a French press will require a bit more maintenance and time than a regular drip coffee machine, but if you want to upgrade your coffee game, this is the way to go. The two coffee makers are a great base for moving into the world of coffee fanatics even if you’re a beginner.

But which one do you choose? Well, that’s really up to you, but here we’ll quickly compare both so that you have a better understanding of which one is better for you. Read below to find your new favorite coffee maker!

About the Moka Pot The magic of a moka pot is all in the way your coffee is brewed. When you put the pot on the stovetop, it’s heated up and creates a concentrated coffee that’s incredibly smooth and creamy. The pots are made from aluminum or stainless steel and unless the manufacturer says otherwise, they can be used on any stove with or without a flame.

Originally, the moka pot was used by Italian coffee makers as a simple method for brewing coffee. It was used in homes across Italy starting around the 1930s and was a great way to make delicious coffee without all the hassle. The original brand is Bialetti and if you’re curious, they do still make moka pots. In terms of skills needed to use the moka pot, it’s very simple. Can you turn on a stove and fill a cup with water and coffee? If so, you can use a moka pot without struggling.

About the French Press

French presses have a home in just about every coffee shop as many coffee drinkers prefer the rich taste over the old drip coffee. By using coarse coffee grounds, you are able to extract all the rich flavors coffee has to offer in a short amount of time. When you use a French press to brew your coffee, you’ll use near boiling water to cover your coffee grounds before letting them steep for about five minutes. It’s very simple and doesn’t require you to watch or pump the coffee while it steeps. After the steeping time, just press down on the mesh plunger to trap the coffee grounds and it’s ready to serve!

Although the original patent for the French press came from Italy, there are two references to it in French culture before than. The first time the French press is referenced is in a book from 1852 and the second time is in a story about a Frenchman who accidentally made his coffee by this method.

All in all, the French press is very easy to use. Either buy coarse coffee grounds or grind them yourself and then dump them into your French press. Add your hot water (that isn’t boiling) and let it all steep for several minutes. Press your plunger and tada! Your coffee is ready to drink.

While you can just buy both coffee makers, perhaps it’s a better idea to start out with just one. How do you choose though? Now that you know a bit about both, you can compare on your own. However, if you want a simple guide to compare the two directly, read below!

If you’re in a bit of a rush in the mornings, you won’t want to spend several minutes preparing and brewing your coffee ahead of time. The French press and the moka pot are going to require a bit of your time, but in different ways.

When using a moka pot, you’ll spend most of your time heating the water. After your water is boiling, the rest of the process doesn’t take too long. By using pressure to extract the coffee, you should get your coffee in about five to ten minutes after your water is fully heated. From start to finish, the entire process can take ten minutes or more depending on your water.

Be careful not to leave your moka pot sitting too long. If left unattended, your coffee could take on a bitter taste, so you’ll want to keep an eye on it.

With a French press, there’s no possibility of prepping ahead of time. Unlike the moka pot, you should wait to grind your coffee until you are ready to use it. Fortunately, you don’t have to wait for your water to boil as you actually don’t want it to.

Once you’ve heated your water and poured some coffee grounds into your press, add the water and let it all steep for five minutes. Until you really get a hang of the system, the entire process will take about ten minutes.

The moka pot works well with any grind size except for very fine grounds. If the coffee is too fine, you’ll get weak coffee. Fortunately, the typical grind size works fine with moka pots so you can buy pre-ground coffee or grind it yourself. If you choose to grind it yourself, you’ll have more flexibility and can try different grinds until you find your favorite.

For the French press, you should really only use coarse ground coffee. Unfortunately, since you want to grind your coffee moments before using it, you shouldn’t buy pre-ground coffee. This means you’ll need a grinder on hand.

Due to their different brewing methods, the moka pot and the French press produce different flavors and qualities. The moka pot brews a sharp, strong coffee that is good with creamy milk and energizing. It’s more concentrated and because it uses pressure to extract the coffee flavor, it is more similar to an espresso machine (though not an exact replacement).

Both these coffee makers produce great coffee, so it’s up to you to decide between a strong, sharp coffee or a lighter, full bodied coffee. There is a learning curve whenever you purchase a new coffee maker, but the moka pot has a bit more to it than the French press. With the moka pot, you have to be careful not to overbrew or underbrew it which is more difficult than you may think.

Typically, the problem lies in the grind size so it’s something you can change, but it can also be caused by your tamping technique. Don’t tamp too hard or the water won’t be able to get through the grounds, but if it’s too light, you’ll get a weak brew.

With the French press, there is a much lower learning curve. Following the directions always ensures a great pot of coffee so if you’re looking for something classy but easy to use, the French press is the way to go.

There’s no one saying you can’t own both a moka pot and a French press. If you want both and feel like you would make coffee with both methods, then go ahead and purchase both! To choose between one or the other though, you’ll need to look into your own personal preference on coffee.

With the moka pot, you’ll spend some time experimenting with the brew strength before you feel satisfied. This can be frustrating, but if you want to brew a stronger or weaker brew in the future, you already know how. The moka pot allows you to have more control over your coffee and allows for more experimenting.

With a French press, you’re slightly more limited. The press is simple though and if you’re looking for something simple and delicious, it’s a great way to go.

Due to the fact that the moka pot is less limiting and offers a bit more creative freedom, the moka pot has won this one. It has more flexibility and the brew time is about the same as the French press. Once you’ve got it figured out, you’re free to choose a different grind or bean flavor without having to additionally purchase a grinder.